These two days I have been going to networking events, asking around about the iOS industry. Yesterday I actually have met another independent iOS developer named Adam. Boy, aren’t I glad! It turned out we had a lot in common. Although he used to develop web apps, he recently started to develop for iOS and he actually has an app in the app store “Deep Journey“. The app is a visualization tool for the Mandelbrot Set, implemented using Apple’s graphic library “Metal”. I was quite impressed that he is able to independently develop something like that.

At home, I have been learning from Caleb Stultz‘s lectures about using Sketch. Here what I have learnt: Working with layers, styles, shapes, masking images, proportional scaling objects, text following a path, shape boolean, making symbols from groups and exporting graphics for different screen sizes of any popular mobile device. Additionally, I have also gone ahead and followed his tutorials on how to design a chat app simply called “Chat”. From the looks of it, I think his designs are highly conforming to the iOS Human Interface Guidelines, which is essential in getting it approved for the App Store. 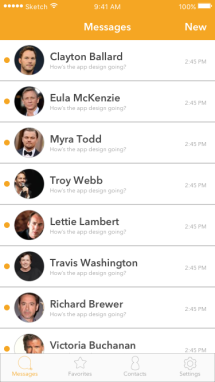 I am a passionate iOS developer residing in Waterloo, Canada. View all posts by monorailapps

Hello, my name is Kevin and I have been enjoying writing code since a very young age! Currently I work as an independent freelancer specializing in iOS app development. Although I am still learning, I have written numerous iOS apps that are fully functional. Check out my various projects such as "Pokédex" and "RainyShinyCloudy" on GitHub Here!
%d bloggers like this: